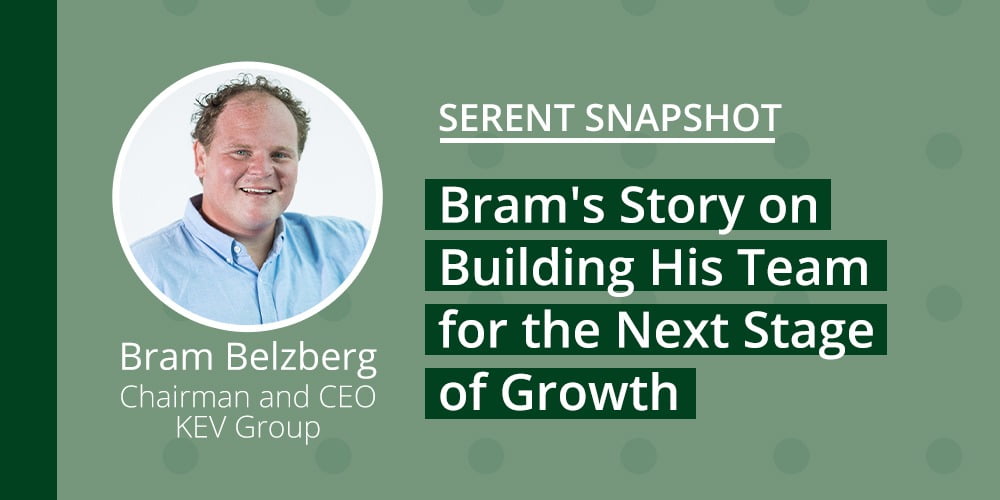 Meet Bram Belzberg, the Chairman and CEO of KEV Group. KEV Group is a software business that provides back-office accounting and online payment solutions for public schools across North America.

KEV Group was formed by Kim-Vivian Downs and Evelyn Eagle in 1996. Bram joined the company about twelve years later, when it was still a relatively small operation. “I’d been a finance guy and decided it was time to find myself an operating job where I could actually affect the lives of people and build a real, operating company. I joined KEV Group as their Chief Operating Officer in 2009, and six months later was promoted to the Chairman and CEO role.” Bram has been in that role ever since.

Navigating the Search for an Investment Partner

KEV Group was growing. The team needed to rebuild a lot of its technology and acquire new team members to take advantage of big opportunities on the horizon. Bram hired a few people and the team worked hard to avoid the need to raise funding. Throughout this time, Bram began meeting with the Serent Capital team because they had been visiting his team up in Toronto regularly.

“Serent Capital came to understand our business really well. They also knew the space more than any other investors I was speaking to. And they weren’t so pushy about trying to make an acquisition. Sure, they wanted a deal like every other investor. But Serent Capital also proved their desire to build a relationship with me.”

“Before Serent, we tried our best to put together a thoughtful group of people that genuinely cared about our business, but it was hard because without a real financial stake, it’s challenging to get people to give enough time to understand and invest their time in the business. At some point, we decided that we were going to raise capital from an outside source.”

KEV Group hired an investment banker and created a book that was sent to many investment firms. This sparked massive interest. At this point, Serent chose to stand aside while the process played out. KEV Group decided to give the top bidders an opportunity to invest, leaving behind several potential partners.

Unfortunately, a big problem arose. Bram narrowed it down to his choice of 8 bidders. Once Bram and his team started having deeper conversations with the final parties, he realized that, among other factors, KEV Group’s culture and vision for future growth didn’t match up with his potential partners’. That’s when the process started to fall apart.

“At that point, we decided to go back to just one investor, the only one that had treated us really well the whole way through.”

KEV Group ultimately walked away from the process. “At that point, we decided to go back to just one investor, the only one that had treated us really well the whole way through.”

KEV Group sold a minority stake in the business, closing the deal with Serent Capital in September 2018. They closed on a key add-on acquisition deal the next month, reaching a critical milestone on their growth roadmap.

Bram’s primary reason for doing a deal with Serent Capital was to tap into the Human Capital team. “The pain point I was feeling as a CEO was that although we had a high-quality management team, it was small, and it was becoming clear we needed to make some key hires to continue to expand the team and grow the company. I also didn’t have a board of directors. I was feeling very alone.”

“It’s not like we had not done hiring before,” Bram says. “But hiring had often been done based on gut decisions: Is this the kind of person we can get along with and trust?”

“I ended up relying quite a bit on the broader team, on our board, on the Serent Growth Team, on the Serent investment team, and then absolutely on the Human Capital team—from advising me on the process to being active members in the search for team members.”

“Recruiting and hiring require heavy lifting. Working with someone who has hired a Director of Sales fifteen times before—that’s invaluable.”

Finding the right Head of Sales was one of KEV Group’s most important, time-sensitive hires leading up to the investment. A member from Serent Capital’s Human Capital team was active on every strategy call. They helped KEV Group choose and negotiate a deal with the right recruiting firm. They helped KEV Group create the job specs and figure out their go-to-market plan on how to execute and how to interview. When KEV Group went to market, they helped them in weekly meetings.

And ultimately, it was the Human Capital team who found the candidate that KEV Group hired within Serent’s proprietary network of Sales executives.

KEV Group had about 40 people when they began working with Serent Capital. Nine months in, that number doubled to about 85 members. “We’ve added a CFO, a Head of Sales, a Head of Customer Success, and a Head of Implementation, as well as board members, a marketing director, and their Head of HR. We’ve also built an eight-person sales team.”

“Recruiting and hiring require heavy lifting. Working with someone who has hired a Director of Sales fifteen times before—that’s invaluable.”

“Sure, we might’ve struggled through most of these decisions without Serent Capital. We might have made most of the decisions right. But if two or three of the hires were postponed for a year or two because of an initial wrong decision, I think that the ramifications of that mistake would have been so much more than any upside we would have given by bringing a third party to the table.”

Capitalizing on the Strength of Multiple Teams

“Serent Capital has a Growth Team and a Human Capital team. They use them both, and they don’t charge consulting fees. They really care. They encourage you to use these resources on their dime, which is unique. It’s not really about the money, it’s about the philosophy behind it. Those resources are usually very helpful and a huge value add.”

“When you add it all up, what you get is people who are really just in it because they want the business to succeed. And they do it because they love it, and that’s why I do what I do.”

“The Serent Capital team is not too big for their britches. They’ve done really, really well and they’ve done a lot of really good investments. But I think that they remembered what makes them special—their humanity. They’re just normal human beings and they’re good people and they treat people with respect. When you add it all up, what you get is people who are really just in it because they want the business to succeed. And they do it because they love it, and that’s why I do what I do.”

“Everyone who is in a situation to sell their business to Serent Capital is already in a good financial position. At that point you have the luxury, I would argue, to make decisions based off of who you want to spend your time with and how you want to be challenged.”

“When I used that lens, that’s when I ended up choosing Serent, and you know, interestingly enough, many people said to me ‘You know, Bram, when you’re picking a private equity partner, you make sure that you pick good people—people you can work with when things go bad. But it’s hard to hear that and not still turn around and look for the highest bidder.'”

“I was really lucky that my process was not a simple one. It was bumpy. If it wouldn’t have been, I probably would be in a situation where I was doing a deal with people who weren’t a good fit. I think the Serent Capital team, from what I can tell, are all really just good people and that’s what matters.”

At Serent Capital, we work hard to create effective and longstanding growth with all our portfolio companies. Here’s what we’ve been up to recently.

Other News at Serent Capital

At Serent Capital, we work hard to create effective and longstanding growth with all our portfolio companies. Here’s what we’ve been up to recently.

Digital Health: 4 Key Trends Driving Funding Activity and How to Capitalize on Them

Nothing presented herein is intended to constitute investment advice, nor sales material, and no investment decision should be made based on any information provided herein. Information provided reflects Serent's views as of a particular time and are subject to change without notice. Any forward looking statements or forecasts are based on assumptions and actual results are expected to vary from any such statements or forecasts. While Serent has used reasonable efforts to obtain information from reliable sources, we make no representations or warranties as to the accuracy, reliability, or completeness of third party information presented herein. Past performance is not indicative of future results. There can be no guarantee that any investment strategy employed by Serent will be successful. A full list of portfolio holdings is available on Serent's website.